The timing of our pilgrimage was really providential. The Friday before we took off, our dear friends Katie and Kevin got married – Mr. and Mrs. Gearns! We spent a few days in Pennsylvania with them, celebrating the joyous occasion of their nuptials. Katie looked like a princess and Kevin was glowing – yes, the groom was absolutely aglow! I don’t know if I’ve ever seen a man stunned so happy in his life. But when Katie walked down the aisle, I imagine Kevin’s reaction was somewhat like Adam’s upon first seeing Eve , an overwhelming joy –“At last! Bone of my bone, and flesh of my flesh!”

As always, it was great to reunite with our BU Catholic Center friends from all over the country #Sacramentsarewhatbringustogether. From Matt Hall’s dance moves to Elise channeling the essence of Lady Liberty, twas truly not an evening to be missed!

Two goons that crashed the party.

The Melendez…’s having a special moment 🙂

Saturday afternoon we drove to Holmdel, New Jersey and visited family. We stayed at Josh’s Aunt and Uncle’s house, along with Josh’s grandparents. It was great to see the family! That night I went into the city with the Grandparents to meet up with Josh’s mom, dad and sister Katie…and we all went and saw Aladdin! Of course, this was a real treat for this 90s girl/Disney fanatic. Although the story was somewhat altered (it always has to be for the stage, eh?) it was still really good. By far, my favorite was Jafar. His laugh was so incredibly villainous, and almost exactly the same as the voice from the movie.

The next day was the real highlight though. Katie, our little sister, played with her orchestra at Carnegie Hall! She’s a part of ESYO, the Empire State Youth Orchestra. It was our first time getting to hear the group, and they were very talented. We spent the afternoon hanging out with the immediate family and some of our cousins. That night we ventured out and walked around the city, in pursuit of ice cream. After grabbing some Ben and Jerry’s, we split off from Mom, Dad and Katie and went to a couple of pubs with our cousin, Kevin. It was great to catch up! We hopped on the train and headed back to Holmdel around 11 or midnight.

Julia pretending not to love me. 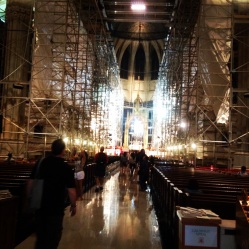 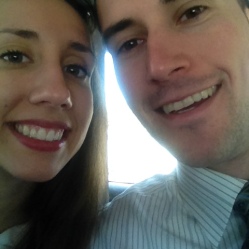 The reward of our hunt.

The next day we mostly packed up and rested because our flight was taking off out of JFK that night. We made it to the airport without a hitch, and got on our flight to Copenhagen. The flight was only 6 or 7 hours, but it felt like one of the longest nights of my life. Within a 15 foot radius, there were three very unhappy babies taking turns (it was a conspiracy) WAILING. Even with earplugs and a blanket over my head, I don’t think I slept more than 30 minutes on our red eye flight. I’m sure those parents slept even less! Yikes. So when we got to Copenhagen, we found some comfy chairs in a quiet corner area of the airport and absolutely crashed. We had a six hour layover, and I think we slept the majority of it. Next we hopped on our flight to Rome, and it went smoothly as well. Arriving in Rome, our baggage didn’t get lost – so that’s always a good way to start a trip!

Being advised by the seasoned travelers, Aunt Anne and Uncle Dan, we booked an apartment in Rome rather than a hotel. Our apartment was through Rental in Rome, and it came with an option of an airport pick-up. Round trip, that cost us about $80. IT WAS WORTH EVERY PENNY. First of all, FCO is a reasonable distance (30+ minutes) away from old Rome. So taking a taxi is an expensive option to get the apartment from the airport, anyhow. Secondly, I cannot imagine trying to figure out the Italian trains and buses at 10:00pm after traveling for a full day. Also, as we found later, Rome does not have north, south, east and west. Everything is on a diagonal, down an alley and streets are not guaranteed to have streets signs. So after getting off a train or bus (with luggage!), I have no idea how we would have found our way to our little apartment tucked away in an alley, a few minutes away from the Piazza Novona. So thank you, Rental in Rome, for sparing us that scenario!

Instead, we were greeted by a darling young Italian man holding a sign with our names on it (yeah, we felt cool). He helped us with our luggage, and we were on our way. It was beautiful and strange to drive into Rome with Josh. The last time I was in Europe, I had known Josh about 2 months and was thinking of him often while I traveled around with my classmates. Now, 9 years later, we traveled alongside each other sharing the adventure as husband and wife (and carrying our first child!). My heart felt so full, so blessed.

Our kind driver dropped us right off at our door. Shortly after, the Rental in Rome representative met up with us, gave us our keys, and showed us a few things about the apartment. He also gave us some maps which definitely came in handy later. Exhausted and so grateful to have arrived safely, we fell asleep.

Some notes about the apartment I jotted down:

The apartment looked nicer on the Rental in Rome website. The pictures had obviously been brightened. I knew the apartment was small, but the pictures and the way they staged things made it seem bigger. From other renter reviews, I knew the ceiling in the lofted bedroom would be low but I didn’t know how low…it was so low you couldn’t walk upright. The bathroom was TINY and kind of challenging to shower in (see pictures and you’ll see why) But the location was great – very central. We could walk most places. Overall though, the apartment worked out great. And we were lucky that we had AC! The lofted bedroom did get pretty toasty though, and Josh slept on the couch some nights because it was just too warm upstairs. Despite the few inconveniences, we liked the place and I wouldn’t change it.

Looking at our notes as we wait for the Rental in Rome rep. 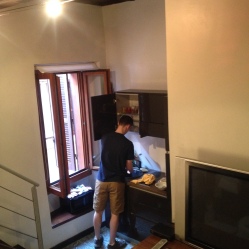 first morning, filling up some water bottles I think?

looking down the stairs right by our apartment door. 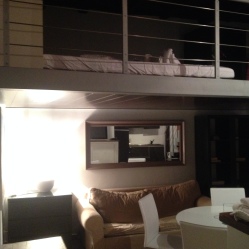 Living room and loft above 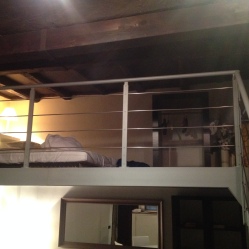